It Really Feels Good to Be Back Here Again 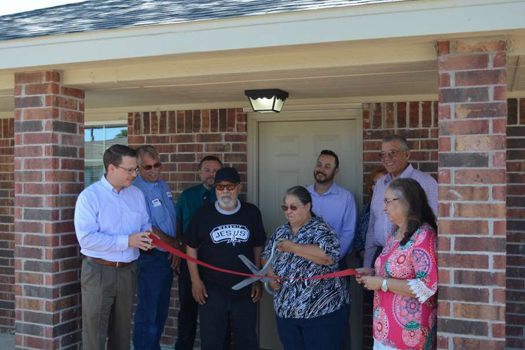 Plainview City Manager Jeffrey Snyder (left) and Plainview City Secretary Belinda Hinojosa hold a ribbon for Abraham and Rosa Martinez to cut outside the couple’s new home. They were one of three families to recently receive keys and take possession of newly constructed residences.
Photo courtesy of the Plainview Herald

*Note – Home repair activities featured in the article below were made possible through a funding award from the TDHCA HOME Homeowner Rehabilitation Program to the City of Plainview.

Although it took almost three years, from initial application, through an exhaustive screening process, demolition and construction, they all admit it was worth the wait.

The three houses, which now belong to Abraham and Rosa Martinez, Shasha Olvera and Irma Pantoja, are the last of eight houses constructed through the 2014-15 Plainview HOME Grant.

The grant program is designed to reconstruct substandard housing within the city.

The South Plains Association of Governments (“SPAG”) provided grant administration for the project.

According to SPAG, “After some adjustments to the program, the City of Plainview has been able to fund the reconstruction of eight homes. Construction on the first five homes began in 2015, after all required documentation from both the city and each individual homeowner was submitted to TDHCA.”

Construction on these final three homes began in late 2016.

“Each home is an entirely new construction and is approximately 1,170 square-feet with three bedrooms, two bathrooms and includes new appliances, carport, parking pad and energy efficient windows and doors.”

Although each house follows the same basic floor plan, homeowners were able to pick their own exterior brick colors as well as interior paint schemes and flooring. They had the option for either gas or electric stoves.

“This is such a wonderful program which helps families who are in homes which are usually beyond repair,” commented Mayor Wendell Dunlap. “It takes a lot of effort to make this happen, and each of the families had to do a lot of homework.”

Irma Pantoja will be sharing her new home at 1209 Joliet with three children, sons Aaron and Adrian and daughter Angelica.

“It’s been a long three years,” she said after receiving keys from Dunlap. “It took two years after we submitted our initial application and another 11 months for construction.” A Plainview resident for the past 30 years, she has lived at this home since 1990. Her original home was demolished before construction could begin on the new house. In the interim she and her children lived in an apartment or stayed with friends. “It’s wonderful to be able to finally move back home,” she said.

It means a lot to Rosa Martinez to return to her home from the Date Street Apartments, where she and her husband stayed during construction.

“My father used to live here,” she said. “I was raised right here, and it’s been our home for many years. It really feels good to be back here again.” She and her husband are retired.

“I really believe that getting into a brand new home will add another 10 years to your life,” Dunlap told Rosa and Abraham Martinez. “That’s because you don’t have to worry about upkeep and repairs associated with an older home.”

Shasha Olvera got emotional when she received keys to her new home. That’s because she had planned to share the residence with her mother, who died while it was under construction.

“I’m glad this is finally done,” Olvera said. “It was her (mother’s) dream to get the keys in her hands.”

According to Herald records, the homes were constructed by Qualls Custom Homes of Abernathy. In 2014, Snyder explained, “Participating homeowners must meet certain income qualifications, have a clear title to their homes and be current on their taxes.” Homes generally were in serious disrepair.

“This program involves total demolition and reconstruction,” he explained. Once complete, the homeowner will own the new houses outright, but will not be allowed to sell them for a specified eligibility period which can vary from five to 20 years. The new homes will generally be three-bedroom, two-bath 1,070 square-foot brick homes with carports, washer, dryer, dishwasher and tank-less water heaters.

When the city opened the application process in August 2013, it initially had 26 homeowners sign up. Some did not meet income guidelines while others withdrew voluntarily or their residences required only minor repairs. The list was reduced to 10 with two alternates. Ultimately just eight homes were constructed. Plainview has applied for another round of grant funding.

According to SPAG, Floydada also is seeking to participate in the HOME project. Thirteen residences in Motley and Dickens counties have been constructed through the program in the past five years.

* The U.S. Department of Housing and Urban Development (“HUD”) provides HOME funds to TDHCA through an annual formula grant. The Department awards these funds to eligible applicants, such as the City of Plainview, which expends the funds at the local level to expand the supply of decent, affordable housing.

Need Assistance?
If you or someone you know needs similar assistance, please visit our Help for Texans page to find a local provider.

Administer this Program:
If you would like to administer this program to others in your community, please visit our Notice of Funding Availability (NOFA) page for current opportunities.